Your Metal Fabrication And Solutions PartnerTM

“Thanks for visiting us at the Global Shop 2015 Show and Conference!”

Flexible service counters customized to meet the needs of your customers!

Introducing the Value Series VS5001 Flexible and Versatile Checkout!

Link Building Management presented at Internet Briefing by Joe Spencer – June 4, 2013
Author: spencerjoe@slideshare.net(spencerjoe)
What Are Google Penalties and What to Do to Recover

Use of a Negative SEO Strategy was NOT required. It appears that the former client just keeps making one bad decision after the next. 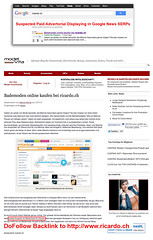 Many people have been asking me about Advertorial Links so I have collected some to show as examples of suspected paid advertorial links.

I also find it interesting that they linked to the homepage rather than the bademoden category page. This possible Blackhat SEO Strategy appears to be focused on passing PageRank.
www.modelvita.com/mode-magazin/2013/bademoden-online-kauf...

On May 29, 2013 Matt Cutts, Head of the Web Spam Team at Google, issued a warning about paid advertorial links.
www.youtube.com/watch?v=1SmlsfSqmOw

Paid Links can be reported to Google at:
www.google.com/webmasters/tools/spamreport